After a long day at work, there is nothing like a good night's sleep! Just like on Earth, a worker in space goes to bed at night then wakes up the next day and prepares for work all over again. There are a few differences, though. 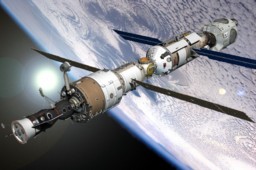 In space there is no up or down and there is no gravity. As a result, astronauts are weightless and can sleep in any orientation. However, they have to attach themselves to a wall, a seat or a bunk bed inside the crew cabin so they don't float around and bump into something.

On the space station there are two small crew cabins. Each one is just big enough for one person. Inside both crew cabins is a sleeping bag and a large window to look out in space. Currently, space station crews have three astronauts living and working in space for months at a time. Where does the third astronaut sleep? If it's okay with the commander, the astronaut can sleep anywhere in the space station so long as they attach themselves to something.

Generally, astronauts are scheduled for eight hours of sleep at the end of each mission day. Like on Earth, though, they may wake up in the middle of their sleep period to use the toilet, or stay up late and look out the window. During their sleep period, astronauts have reported having dreams and nightmares. Some have even reported snoring in space!

The excitement of being in space and motion sickness can disrupt an astronaut's sleep pattern. Sleeping in close quarters can also be disruptive since crewmembers can easily hear each other. Sleeping in the shuttle's cockpit can also be difficult since the Sun rises every 90 minutes during a mission. The sunlight and warmth entering the cockpit window is enough to disturb a sleeper who is not wearing a sleep mask.

When it is time to wake up, the Mission Control Center in Houston, Texas, sends wake up music to the crew. Usually, Mission Control will pick a song for a different astronaut each day. Sometimes a family member will request a favorite song for their particular loved one. Depending on the astronaut, Mission Control will play all types of music such as rock and roll, country and western, classical, or Russian music. However, only a shuttle crew receives wake up music while a space station crew uses an alarm clock.